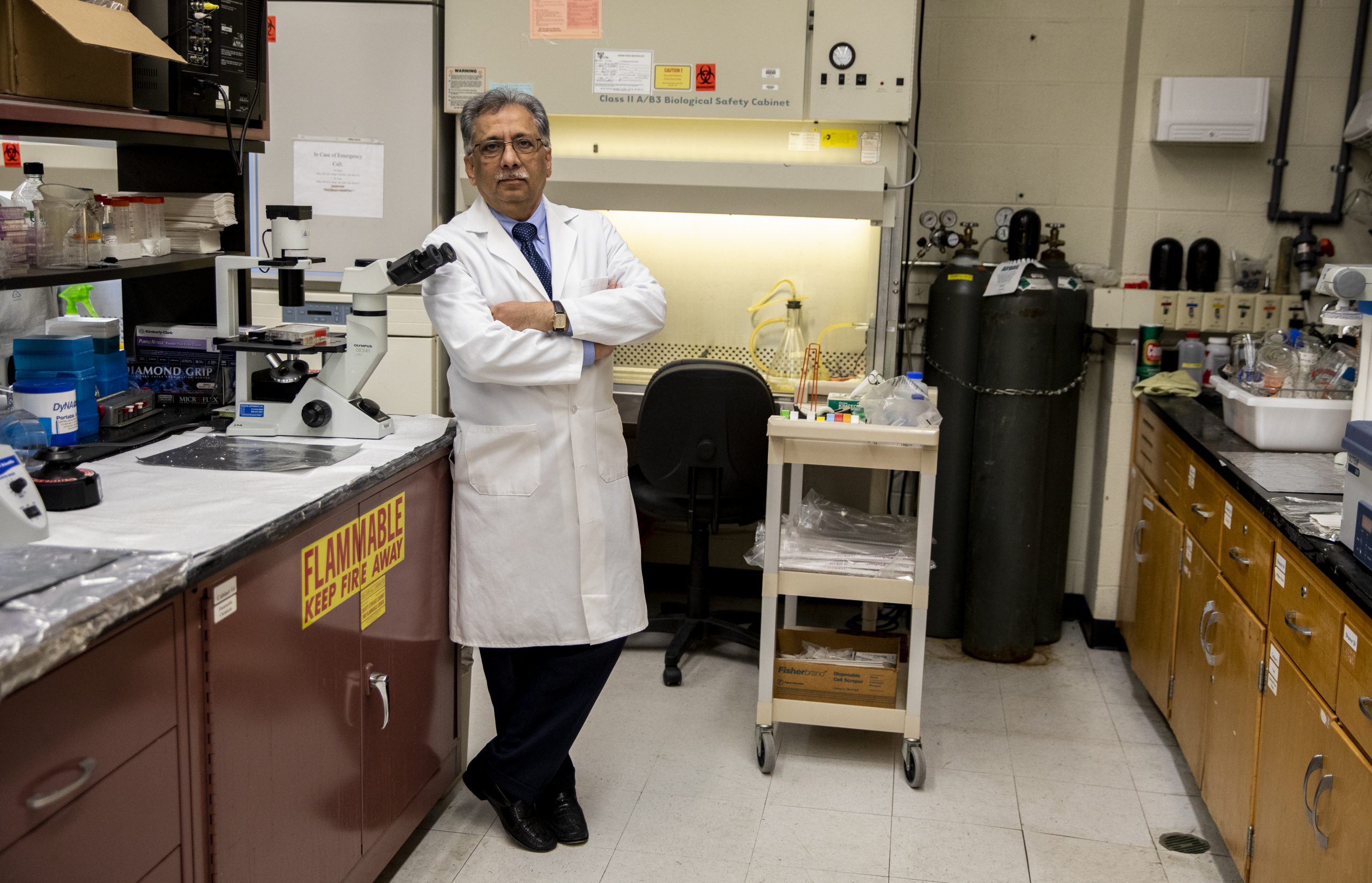 Researcher Salman Hyder in his lab at the Dalton Cardiovacular Research Center at the University of Missouri.

Salman Hyder has spent nearly two decades at the University of Missouri researching ways to stop the spread of breast cancer.

Among his greatest discoveries was that combined hormone replacement therapy (estrogen + progestin) — once thought to be a panacea for women struggling with loss of estrogen during menopause — increases the risk of breast cancer in some women. The discovery was later affirmed by a Women’s Health Initiative study, which led to dramatic changes in how doctors treat menopausal women.

While Hyder, the Zalk Endowed Professor in Tumor Angiogenesis and professor of biomedical sciences in the College of Veterinary Medicine and the Dalton Cardiovascular Research Center, is passionate about his research, he remains humble about his discoveries — characteristics that have endeared him to many graduate students over the years.

Mentoring up-and-coming researchers has not only been a chance for Hyder to inspire young minds, but an opportunity to continuously challenge his own ideas and invigorate his work with new perspectives.

“Of course it takes a very long time to find new therapeutics,” he said. “But what has kept me going — looking for something new every day — are the wonderful students I have had over the years. It’s not just my own interest in research, but training the next generation of researchers that keeps me going.”

Hyder’s work ethic has left an indelible mark on the graduate students who have come through his lab, including Benford Mafuvadze, who came to Mizzou in 2008 from Zimbabwe.

For five years, Mafuvadze was involved in many research projects, including a published study that found luteolin, a natural compound found in herbs, such as thyme and parsley, as well as vegetables, such as celery and broccoli, could reduce the risk of breast cancer for some women who have taken hormone replacement therapy.

Mafuvadze said Hyder’s mentorship put him at ease and allowed him to take risks, make mistakes and, eventually, do his best work.

“Dr. Hyder was concerned about my success as a person, not just the results of our research,” said Mafuvadze, who today is an assistant teaching professor in the department of molecular biosciences at the University of Kansas, where he also runs a lab. “That was very important to me.” 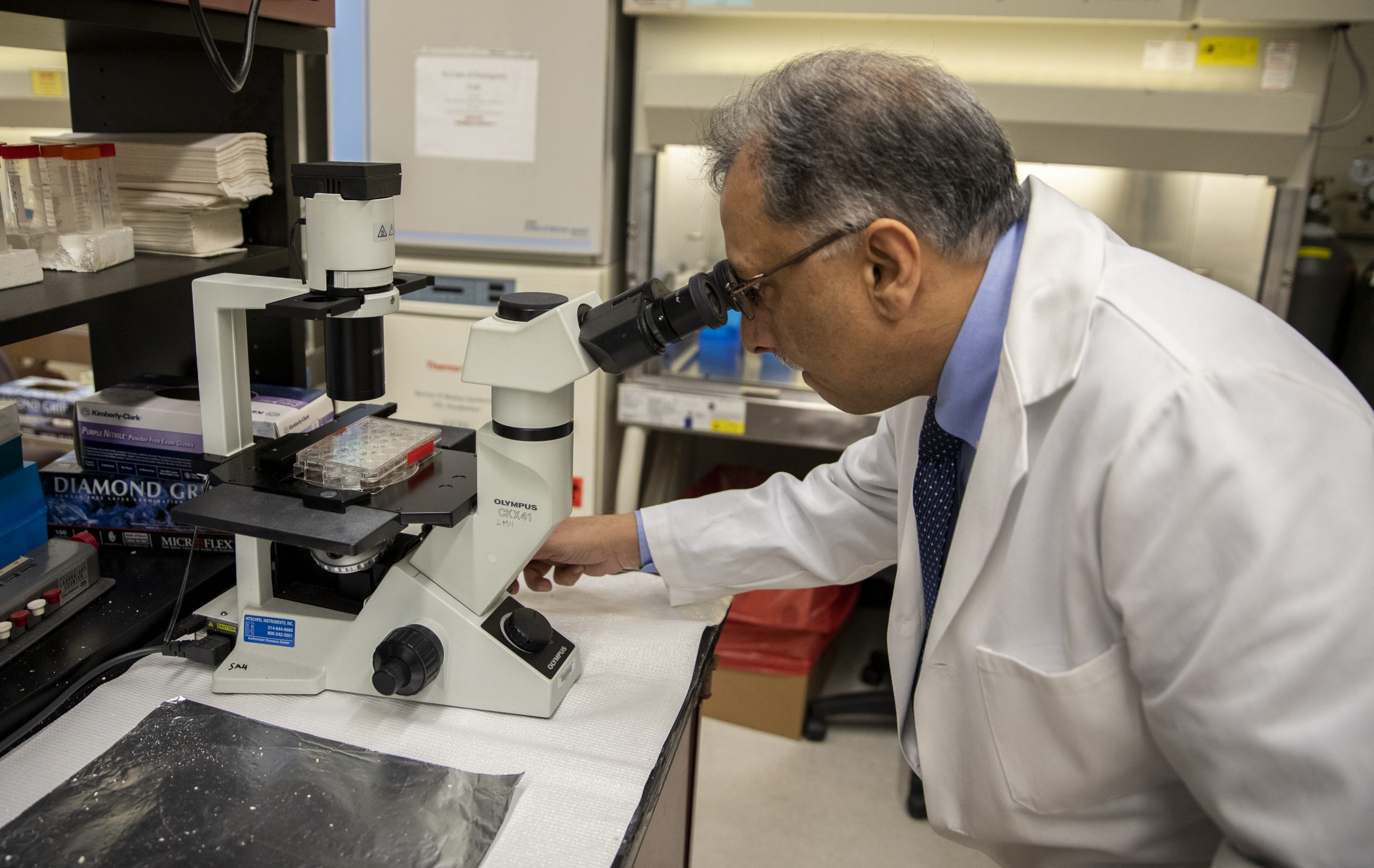 Hyder examines a sample under a microscope in his lab where he has spent years researching drugs and natural compounds to stop breast cancer.

Hyder was born in Pakistan, where his father was an engineer and his mother was a school teacher. As a young boy, Hyder dreamed of becoming a pilot, like his uncle, but his mother wasn’t keen on the idea and it turned out, he would never meet the height requirements.

Next, he set his sights on becoming a doctor. But when he moved to England, his dreams were dashed again — this time because he was a foreign student.

“It was very tough to get into medical school in England as a foreign student,” Hyder said.

The letdown was the beginning of something much better for Hyder: cancer research.

After graduating from the University of Kent in the United Kingdom, Hyder applied for a doctorate program in 1979 at the University of Glasgow in Scotland. That’s where he heard about a research project involving breast cancer and a drug called tamoxifen. Researchers wanted to know why the drug was working for some women with breast cancer and not for others. Hyder was intrigued.

Not long after, the tenacious Hyder was hooked — and breast cancer had met a formidable opponent.

Most recently, Hyder and his research team are tackling new ways to stop triple-negative breast cancer while entering a new era in the fight against cancer that involves personalizing care to meet the needs of individuals. Called precision health, this approach will be the heart of MU’s new NextGen Precision Health building, which is set to open in the fall of 2021.

Matthew Cook, who spent four years under Hyder’s tutelage at Mizzou, is now an assistant professor of biology at Washburn University, where he teaches and runs a lab. Among the many lessons he learned from Hyder was to remain humble about one’s research.

“Being humble helps with everything, especially collaborations with other scientists,” Cook said. “Others want to work with Hyder because of his humility. I am so grateful I chose Dr. Hyder to be my mentor.”

Hyder says as long as there is funding, he will continue to work and mentor young researchers.

Dr. Hyder’s research over the years

New research focuses on using cloud-based technology and decentralization to ensure a secure and trustworthy process.