Since antiquity, cultures around the world have been extracting vegetable oil from plants to use as food and fuel. Some vegetable oils have important health benefits, including lowering cholesterol levels and decreasing the risk of cardiovascular disease.

But there’s a problem: Vegetable oils are traditionally extracted from fruits or seeds, and the extraction process often leads to the rest of the plant being discarded in the process. Now, Jay Thelen, a professor of biochemistry at the University of Missouri, has found a way to boost the production of triacylglycerol — the main component of vegetable oil — in plant leaves, a technique that could allow producers to harvest oil from large, leafy plants that also have other uses. Sorghum, for example — a global source of grain prized for its drought-resistant qualities — could serve a dual role as a source of vegetable oil, creating a more efficient and valuable crop. 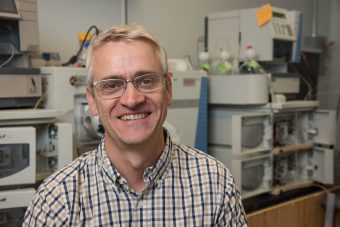 Jay Thelen is a professor of biochemistry at MU.

Thelen and Yajin Ye, a postdoctoral fellow in Thelen’s lab at MU, used the gene editing tool CRISPR to “knock out” a family of genes they have found to be responsible for regulating fatty acid production in the leaves of Arabidopsis, a plant regularly used by researchers to study plant biochemistry. The results were recently published in the prestigious journal Nature Communications.

“We know that plants synthesize fatty acids when provided light,” said Thelen, who has dual appointments in the College of Agriculture, Food and Natural Resources and the Bond Life Sciences Center. “This study taught us that there are three proteins that restrain this process in leaves, and that we can turn off their cognate genes using CRISPR. That frees up the plant to produce higher amounts of triacylglycerol in the leaves rather than just the seed.” 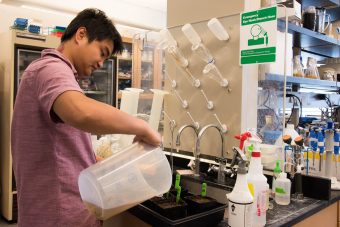 Yajin Ye adds water to the plants in Thelen's lab.

Thelen said this method could lead to greater and cheaper production of vegetable oils, and the possibility of dual uses for leafy crops like sorghum and soybeans could place less of a burden on making a higher-oil seed. That burden often has undesirable consequences — including a decrease in protein, which is the principal commodity in soybean seeds. His lab is now in the process of further testing the method on crops to confirm its viability.

A hunger for research

If anyone seemed prepared to make this discovery, it was Jay Thelen. Hailing from the small town of Seward, Nebraska, Thelen has been seriously pursuing science research since high school more than three decades ago, when he found himself in the classroom of Jim Landon, a nationally renowned science teacher with an unorthodox style. 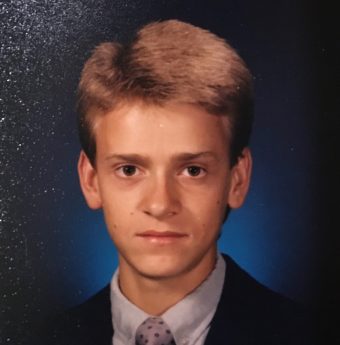 “We got out of the classroom and did ecological experiments on nature reserves,” Thelen said. “We went hiking, assisted with invasive species studies and even helped out on prehistoric digs. We uncovered mastodon bones. It was really impactful stuff.”

Landon took Thelen under his wing, arranging for him to participate in university-caliber research at the University of Nebraska during the summer and — once in a while — on weekends during the school year. Landon, now in his seventies and enjoying retirement in the state of Washington, remembers his former student clearly.

“Jay was a great kid; very inquisitive,” Landon said. “I remember when he was chosen to present his research at the 40th International Science and Engineering Fair in Pittsburgh in 1989. Only a handful of students from Nebraska, Kansas and Oklahoma were selected, and I can still see him standing up there and doing his presentation. In high school, when the athletes sometimes get all the glory, it was great to see Jay take the initiative to do research and even better to see that initiative rewarded.”

Teacher and student have gone on to separate career paths, but they still talk once in a while, reflecting the impact each had on the other. Thelen credits Landon for sparking his fascination with science, while Landon speaks lavishly of how students like Thelen have fueled his passion for teaching throughout his career. 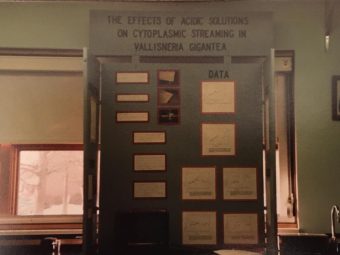 The research project Thelen presented at the International Science and Engineering Fair in 1989.

“It just amazes me what the kids I’ve taught have gone on to accomplish,” Landon said. “For Jay’s research to be published in a journal as prestigious as Nature Communications, it just makes me so proud.”

Despite his success, Thelen has no plans to slow down when it comes to the research that drives his love of science.

“For me, understanding how plant metabolism is regulated is an itch that needs to be scratched,” Thelen said. “Plants are the original 'green' factories for food, chemical feedstock and fuel production. Discovering new metabolic constraints and leveraging these findings to help us adapt to a warming planet — that’s something that motivates me, and there’s still much more to be done.”