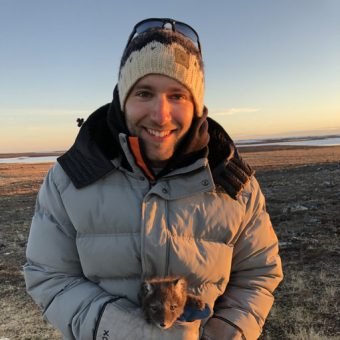 Mitch Weegman in the field.

When planning hunting seasons and other conservation efforts to protect wild turkeys, conservationists have long depended on forecasts of breeding success. In recent years, however, these estimates have been increasingly off the mark, with populations of the largest game bird in North America consistently smaller than expected. A 2016 Missouri Department of Conservation (MDC) survey found the lowest ratio of adult hens to poults (young turkeys) in 56 years.

“We have conducted an annual summer wild turkey brood survey since 1959 here in Missouri,” said MDC Wild Turkey Program Leader Reina Tyl. “While turkey production has exhibited a gradual declining trend over the past several decades, production has been especially poor the last four years.”

Now, University of Missouri researchers in the College of Agriculture, Food and Natural Resources (CAFNR) have received a $1.3 million MDC grant to get to the bottom of this mystery. Using a state-of-the-art GPS and behavioral tracking system to follow turkeys in Missouri, as well as monitoring turkey predators, food sources and weather, researchers hope to give conservationists the information they need to create better estimates and reverse the trend of falling populations.

“Turkeys used to be a success story,” said Mitch Weegman, an assistant professor in CAFNR’s School of Natural Resources. “Conservationists brought them back from the brink in the mid-20th Century using relocations and habitat and harvest management, but the populations are falling again, and we don’t know exactly why.”

The extra-small GPS sensors are integrated into “backpacks” that fit securely onto the birds to minimize the risk of falling off, and Weegman said they represent an important step forward in technological capacity, in terms of the number of locations the units can collect. Weegman and Michael Byrne — whose 2018 study of wild wolves in the Chernobyl Exclusion Zone was featured in National Geographic — will also set up weather stations and wildlife cameras in northern Missouri and capture and mark common turkey predators. This will allow them to cross-reference turkey locations with weather events, temperature and the presence of predators in the hopes of narrowing down what is causing populations to dwindle.

As a cultural icon stretching back to the nation’s founding and a valued game bird across the entire eastern half of the country, the turkey’s plight is an opportunity for Missouri to once again show leadership on conservation issues, according to Weegman.

“Missouri is a well-known leader in conservation, and there is no reason we can’t contribute substantially to understanding the turkey decline,” Weegman said. “We just need more information, and that is where research comes in. Through a combination of GPS tracking, weather monitoring and other data, we can paint a more complete picture of the challenges these birds are facing.”

An additional grant for approximately $1 million from the Black Duck Joint Venture and U.S. Fish and Wildlife Service will cover a similar study of black ducks, which, despite a large population, are also in decline. Weegman said the popular game bird tends to migrate from the eastern U.S. to Canada’s boreal forest during the summer breeding season, and their remote summering areas have traditionally proven to be a difficult obstacle for research into important metrics of productivity, such as the rate of individuals that attempt to nest, nest success and brood survival. With new developments in GPS technology, it is now possible to track the birds without following them to the boreal forest.

“Black ducks breed in very low density across vast expanses of the Canadian boreal forest,” said Ted Nichols, wildlife biologist with the New Jersey Division of Fish and Wildlife. “Past observation and radio-telemetry studies have been limited to small study areas. The new technology in these devices will allow study birds to be tracked, and their behaviors and fates assessed throughout the nesting season, across vast areas of the breeding range. Being in the heart of the black duck wintering range, we are excited to be a partner in this study.”