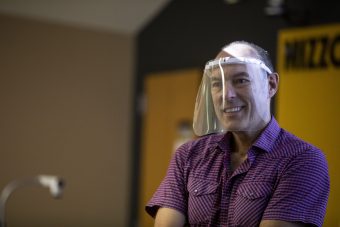 Mun Y. Choi, UM System president and MU chancellor, Latha Ramchand, University of Missouri provost and executive vice chancellor for academic affairs, and Steve Sowers, president and CEO of the central and eastern Missouri region of Commerce Bank, today awarded a 2020 William T. Kemper Fellowship for Teaching Excellence to Craig Kluever, a professor of mechanical and aerospace engineering in the College of Engineering.

College of Engineering interim Dean Noah Manring and administrators surprised Kluever by honoring him with the fellowship, which includes a $10,000 check. Kemper Fellowships are awarded to five outstanding teachers at the University of Missouri each year.

A bio of Kluever is available here.