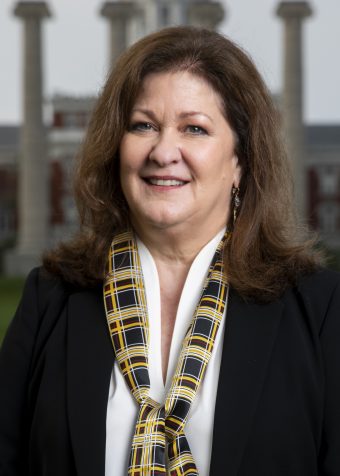 Jackie Lewis grew up the youngest of six children in a small town in Iowa.

Her dad was the hometown veterinarian. Her mom was a homemaker, managing a busy household where Lewis learned early that progress is powered by teamwork, integrity and strong values. From the beginning, she set high standards for herself.

Lewis has never lost sight of her upbringing.

When she took the helm in August as vice chancellor for advancement at the University of Missouri, Lewis brought with her all the lessons of her youth and the wisdom of experiences that have come in its wake. She is right where she wants to be.

“This feels like coming home for me,” Lewis said.

As vice chancellor of advancement at MU, Lewis oversees 180 employees, including 62 major gift officers. Lewis and her team are investing in relationships by strengthening engagement, cultivating partnerships and building a pipeline of support. Also, she is working to invest in the future, by championing inclusion, diversity and equity, and embracing innovation.

Before coming to Mizzou, Lewis made a name for herself securing support for a multitude of public university projects. Most recently, she spearheaded the University of Maryland’s $1.5 billion campaign, Fearless Ideas: The Campaign for Maryland, which has raised more than $1.3 billion to date. She also helped secure a $220 million gift, the largest in the university’s history. She led Maryland to new records after successfully closing For Iowa: Forever More, a $1.97 billion campaign for the University of Iowa. She led in elevating roles at Iowa, including her time as vice president of Health Sciences Development.

Lewis understands what it means to be fearless. She credits her intrepid nature to her parents — who gave her the confidence to do anything if she set her mind to it — and a year in Norway as a foreign exchange student.

“I really grew up during that trip,” Lewis recalled. “It tested my ability to be independent, make decisions and experience something completely out of my comfort zone. It was an amazing experience and opportunity, and it allowed me to build a lot of confidence for what came next in life.”

While her career over the years has taken her across the country, Lewis said each move has been thoughtful. Her decision to come to Mizzou was no different. At MU, she saw an opportunity with potential, because of visionary leadership, strong partnerships and a committed base.

“The more I learned about Mizzou, the more I saw big ideas taking hold. It takes visionary leadership to elevate an institution with this kind of footprint, and Mizzou is making its move on truly big ideas,” Lewis said. “What Mizzou has is that magical combination — we have big idea leaders coming together with committed supporters who are highly invested in our success. This is the kind of environment where real transformation takes place.”

Lewis plans to build on the success of the Mizzou: Our Time to Lead campaign that surpassed its goal of raising $1.3 billion to support and advance the education and research goals of the university. She also intends to examine the campaign and how those results might inspire new engagement and fundraising strategies. Additionally, she plans to bolster MU’s up-and-coming health care fundraising philanthropy and to continue building on the momentum of NextGen Precision Health.

When it comes to philanthropy, Lewis believes in the power of stewardship.

“Our donors are making an investment with us,” she said. “They are committing to us, and it is our responsibility to show them the impact they’re having. We are very focused on this now as we close the campaign, but in many ways this is just the beginning for Mizzou. We are poised for great success and together, we’re going to make that happen.”

Getting to know Vice Chancellor Lewis

What was the last book you read?
I’m just finishing David Novak’s book “Taking People with You.” It’s about how to build strong teams so that as you set big goals (and then blow past those goals), you build on the energy and strength of your teams. It’s an excellent book and I really enjoyed hearing from our incredible Mizzou alum and business leader.

Favorite local place?
When you’re new to town you get a lot of suggestions on places to visit and eat. Certainly, Shakespeare’s Pizza offers that wonderful college town, pizza joint experience right on the edge of campus. I can see why it’s such an alumni favorite!

What advice would you give to yourself in college?
I recently sat on the review panel for Homecoming Royalty, and I was so impressed by the students in Top 30. They are amazing leaders taking full advantage of the service and growth opportunities that college has to offer. If I could go back in time, I would take a cue from these students and follow in their footsteps.

What’s your favorite campus landmark?
Without a doubt, the Columns and what they stand for. What a captivating story that really speaks to the strength of this institution. The now famous line from G.F. Rothwell, president of the university's board of curators “Let them stand, let them stand a thousand years” brings chills every time I hear it.