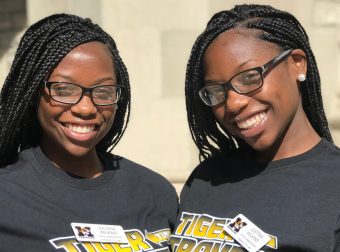 In October 2019, Justina and Julisha Wilkins received dire news: Their grandmother had been admitted to a hospital’s intensive care unit while struggling with dementia, diabetes and kidney failure. The twins’ father encouraged them to say their last goodbyes.

Julisha rushed home from a study abroad experience in Spain to be at her grandmother’s bedside. Justina juggled exams and other academic commitments while fighting back tears. For both sisters, losing Grandma Wilkins was unthinkable. The elder Wilkins had set the sisters on their path to the University of Missouri, having signed them up for the Kauffman Scholars program that has provided academic support from middle school in Kansas City, Missouri, all the way into their current studies at MU. More importantly, Grandma Wilkins, whose health has since stabilized, was a big part of the family support system that the sisters have been able to depend on for their entire lives. 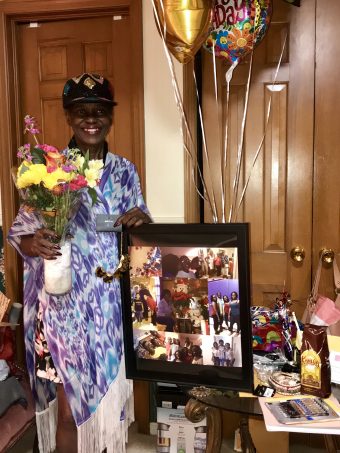 Grandma Wilkins enjoys birthday gifts from her grandchildren and family.

“Without Grandma Wilkins, my sister and I would not be attending Mizzou,” Justina said. “Our grandparents helped raise us, and the connection I have with them is unconditional. I love them to the sky and back. Seeing our grandma and telling her goodbye sent nothing but tears to our eyes.”

Justina, who is studying industrial and manufacturing systems engineering, began to struggle with maintaining her grades as she dealt with the possibility that the upcoming Thanksgiving could be her grandmother’s last. For help, she turned to her engineering professor Sharan Srinivas, whose compassion was instrumental in allowing her to keep her college career on track while working through a difficult time.

“Justina possesses the ideal qualities of a student and is always eager to learn new things,” Srinivas said. “I did not hesitate to accommodate her when her grandmother was experiencing health issues and was happy to help her to be successful in my class.”

For Justina, Srinivas is representative of the teachers at MU who are driven to see their students flourish.

“Every step of the way, Professor Srinivas was understanding and made accommodations for me,” Justina said. “I made a few mistakes and missed an important email about work deadlines, but in the end, I received a passing grade thanks to him. He is proof to me that there are teachers who care about their students and want to see them succeed.” 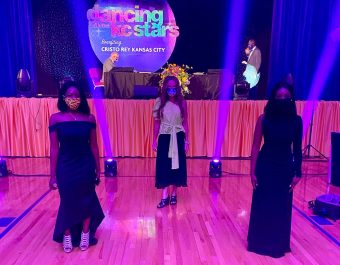 But for all the support from others — including their parents, a long list of faculty and another grandmother on their mother’s side, who has served as a rock of sobering advice and spiritual support — the core of the sisters’ support system is the sisters themselves. The twins rely on each other to get through both good and bad times. Justina, who had been forced to cancel a planned visit to see Julisha in Spain when Grandma Wilkins’ health deteriorated, was shocked to find that Julisha had flown back to Missouri to be with her instead. They were back together again, brought together by the gravitational pull of their love for Grandma Wilkins and for each other.

Indeed, Justina and Julisha have always been inseparable, and they have always supported each other. Julisha shares her sister’s drive for learning, but her education has moved in a different direction, as she is majoring in international business with an emphasis in finance — the “international” part being the purpose of her decision to study abroad in Spain and minor in Spanish. Like her sister, she knew quite early what she wanted to study, and fittingly, Justina was her first business partner.

“When we were kids, we would play engineering games and business games,” Julisha said. “We’ve always felt like one day we would go into business together. I would handle the finance side and Justina would build things. That’s a dream we hope will become reality one day.” 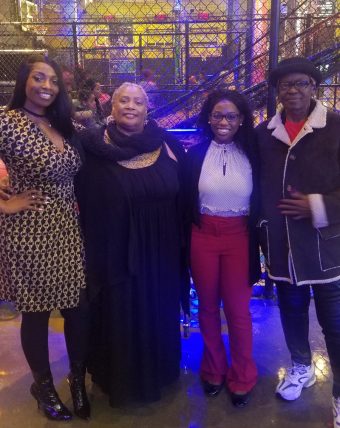 Justina’s passion for engineering can be traced back to A Series of Unfortunate Events, a book series she read voraciously as a child. She always identified strongly with the character Violet, whose masterful knowledge of engineering and physics allowed her to improvise inventions off the top of her head. Coincidence or not, the books’ descriptions of Violet’s long, dark hair — tied back when she is focusing on building another brilliant invention — could pass for descriptions of Justina herself.

Thanks to Grandma Wilkins, the twins were on track to realize their dreams of engineering and international business as early as sixth grade, when she signed them up to attend an informational session about the Kauffman Scholars program. Now, as seasoned Kauffman Scholars, they are looking ahead to careers and possible graduate studies.

Founded by the Ewing Marion Kauffman Foundation, Kauffman Scholars supports students throughout their educational careers with scholarship awards and academic support until their postsecondary education is completed. The program will finish supporting its final class of scholars in the 2021-2022 school year, but its legacy will continue under the banner of KC Scholars, a scholarship program also established by the Kauffman Foundation. KC Scholars began awarding scholarships in 2017 and awards at least 700 scholarships annually. In 2018, MU and the University of Missouri System partnered with the program to provide $40 million in scholarships for students in Kansas City.

The twins are proud to be Kauffman Scholars, but they are most thrilled by the opportunity to be role models for other students. They are looking to pay forward the guidance and support they have received from family, from the Kauffman Foundation and from MU.

“We will always remember where we came from, but at the same time, it’s important to look to the future, to reach toward our goals and to help others reach their goals,” Julisha said. “We love to motivate and teach people about education; we’re here for any student who needs anything at all.”