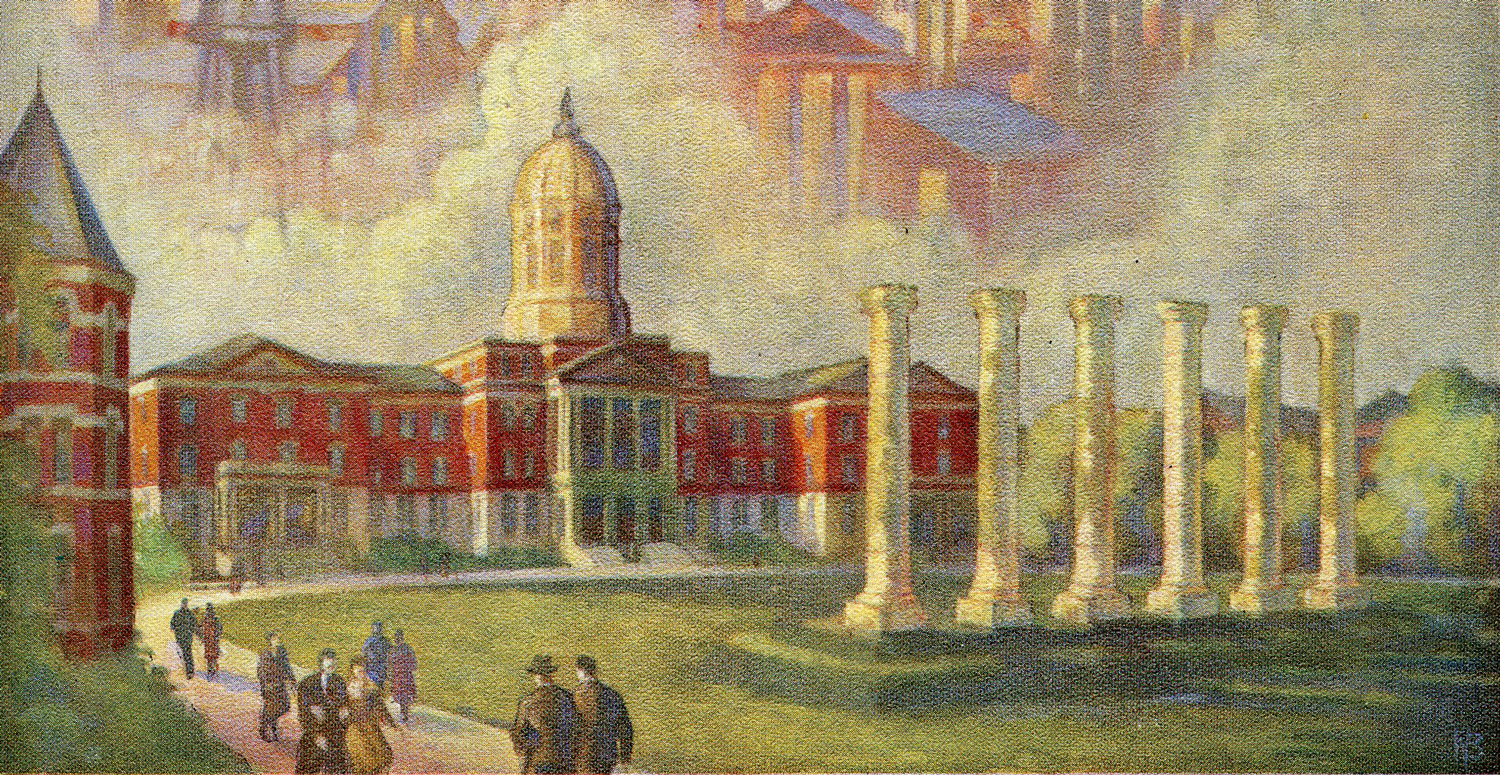 1928, Page 2. The Latin phrase "Salus populi suprema lex esto," (The welfare of the people shall be the supreme law) is the state motto of Missouri.

The Savitar, named after the Hindu god of the sun, began its life in 1894 as the University of Missouri’s student yearbook. For the next 111 years, students cut their artistic and editorial teeth creating stories, poems, essays, photographs, lithographs, paintings, illustrations, cartoons and advertisements for its pages. In so doing, they documented campus life and student imagination down the generations. Future luminaries who toiled in its service include Lisa Myers, BJ ’73; Donald W. Reynolds, BJ ’27; and Mort Walker, BA ’48.

The art of The Savitar bears witness to the ephemerality of fashion, the evolution of social mores, the rise and fall of student traditions, the expansion of the physical campus and the seemingly limitless talent of MU students to create visually compelling images. These illustrations represent some of the best art from The Savitar’s first 60 years. View digital copies of all 112 volumes online via the MU Digital Library at tinyurl.com/savitar-art. Mort Walker was a staffer at The Savitar and at the student humor magazine Missouri Showme.

Mort Walker, BA ’48, arrived at Mizzou already a polished cartoonist, having published his first comic strip in the Kansas City Journal at age 13 and having sold cartoons to magazines nationwide since age 15. One of Mizzou’s most famous alumni, Walker studied at MU in two stints, interrupted by his service in the U.S. Army during World War II. As a student, Walker was a staffer at The Savitar and at the student humor magazine Missouri Showme, where he rose to editor.

His signature creation is the comic strip Beetle Bailey, which he started in 1950. The strip began as a look at college life, fed by Walker’s memories of Mizzou. It wasn’t until 1953 that Beetle joined the U.S. Army, establishing the storyline that made the strip famous. In 1992, Walker helped dedicate a life-size statue of Beetle Bailey on campus. It sits in front of the Reynolds Alumni Center, the former location of a legendary bar known as The Shack, which Walker frequented and which features prominently in Beetle Bailey.

The longest-running strip in comic history, Beetle Bailey has passed its 67th anniversary. Walker still produces the strip, with the help of his sons Greg and Neal. Title page for the class portraits section of the 1943 Savitar.

Click on any image below to begin the slideshow.

1902, Page 146. This depiction of the pseudoscience phrenology appears as one among many drawings throughout the fraternities section of the 1902 Savitar.

1902, Page 202. In the “Digs” section of the 1902 Savitar, writers and illustrators taunt all comers, including this take on students at final exams.

Each of these illustrations are full page dividers for the academic section of the 1914 Savitar.

1930, Page 10. Captioned “The dynamic Tiger spirit of the thundering thousands,” here is one of several introductory images to the 1930 Savitar.

Each of these Mort Walker illustrations are full page section dividers in the 1943 Savitar.

1951, Page 16. An illustration of faculty member Jesse Wrench, part of a larger collection of drawings for the 1951 Savitar.