As paleobiology graduate students, Jim Schiffbauer and John Huntley shared research projects, laughs and a tiny office at Virginia Tech. A decade later, they’re both MU assistant professors, and … not much has changed. They still collaborate. They still laugh a lot. And they’re still in close proximity, with adjacent (though larger) offices. One addition: star protégé Tara Selly, MS ’15, a doctoral candidate with a penchant for investigating the biology and ecology of the fossil record. Schiffbauer is Selly’s official adviser, and she calls Huntley her “step-adviser.” The three worked together on a project that informed Selly’s first paper and the professors’ first published collaboration: studying the predatory behaviors of trilobites — extinct marine arthropods — as recorded in Southeast Missouri fossils. “Ichnofossil record of selective predation by Cambrian trilobites” was published in Palaeogeography, Palaeoclimatology, Palaeoecology. “Very quickly we started finding these traces of trilobites intersecting worm burrows; that was pretty exciting to me,” says Huntley. “Studies suggested these were predator-prey interactions, which is right up my alley. It was in Jim’s time frame (the Cambrian period). And the rocks were preserved in very intriguing ways, so we thought it would be a great project for Tara to take over.”

They collected 82 slabs from the site and gleefully carted them back to a Mizzou lab to get to the bottom of what tiny invertebrate marine creatures were up to 500 million years ago. Assistant Professor
MU Department of Geological Sciences
To Schiffbauer, new collaborative opportunities like the trilobite project seem like kismet — a chance to both build on a treasured collegial relationship and grow an MU program, drawing on a dynamic from the old days.

“Back in Blacksburg we would brainstorm — What would we work on in the future, and how could we benefit each other? — never expecting that we would end up at the same place,” Schiffbauer says. “It’s almost like we grew up together, at least scientifically. And because we knew each other’s work ethic and what questions we were interested in, we could kind of build this group dynamic very quickly.” Now Mizzou paleobiology is expanding. Doctoral Student
MU Department of Geological Sciences
Selly fits right in with her professors, their nerdy in-jokes and their playful ribbing. They value her intellect — and her willingness to meticulously measure and document hundreds of tiny imprints made in rocks, indefatigably. “I was really excited about what was going to come of it,” she says.

She’s also excited about the future of MU paleobiology — so much so that she stuck around for a doctorate after earning a master’s degree in 2015.

“The reason I was interested in coming to Mizzou is I heard the paleo group was growing, and I thought it would be cool to get into something on the ground floor,” Selly says. “Every year we’ve had a chance to do more collaborative things, and it’s been really fun.” 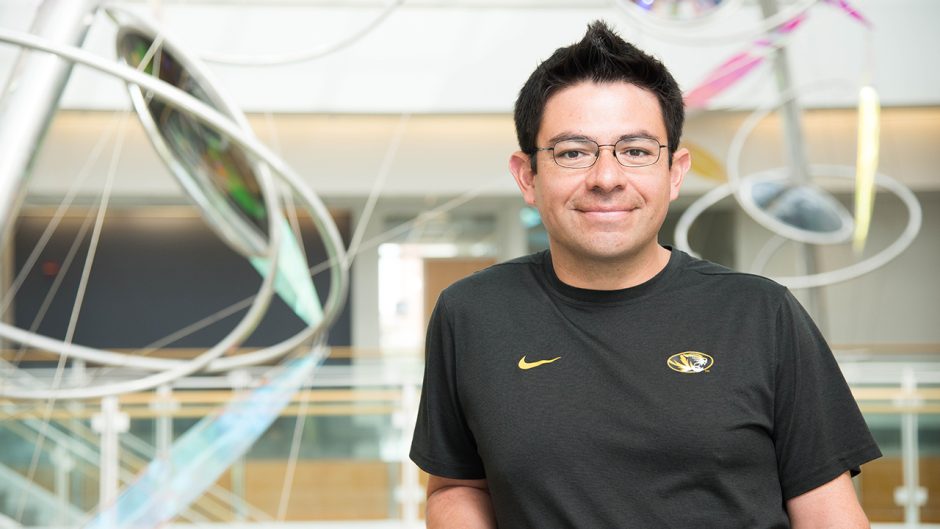 The collaborative project will focus on how synthetic communities can improve plant nutrition.