May 17, 2017
Story by Dale Smith
Photos by Rob Hill and Shane Epping On any given day in the hallways of the School of Journalism, you might hear a particular voice — a big voice. It contains enough rasp and flint that you’d instinctively avoid provoking its higher decibels. It’s also bright, forthright, quick to laugh, in the moment. That’s Earnest Perry “working the halls,” as one colleague puts it. Perry, MA ’95, PhD ’98, might be gabbing about politics and sports with his teaching assistants or discussing curriculum with fellow faculty members, but chances are good he’s chatting with students, hearing them out, helping them get it right.Sometimes, Perry makes a quick diagnosis and prescribes treatment, such as the time a former student, distraught over ailing grades in a writing class, approached him in the hallway outside his office. The scenario was classic Perry, says former colleague Charles Davis, now journalism dean at the University of Georgia. “It’s very much in keeping with his personality and management style. He gets more done in the hall than most people do in meetings.”

The student confided in Perry that she couldn’t figure out how to stop making certain style mistakes. “I said, ‘OK, pull out your last corrected paper.’ When I saw the mistakes she was making, I said, ‘So, I want you to go back, look through your textbook, work through all these errors and correct them. The next time you have an assignment, I want you to have that paper sitting right next you so you can look at it.’ Off she went. Next week, same hallway, she comes back all excited. She says, ‘Dr. Perry, look!’ I check out the new exam, and she didn’t make those mistakes again. Grade went up 15 points.” 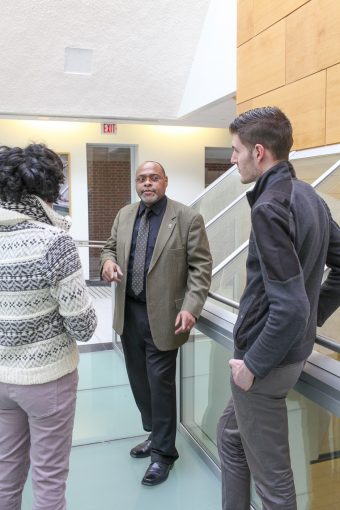 That grade wasn’t the only thing on the way up. In 2016, Perry was promoted to journalism associate dean for graduate studies and won not only MU’s William T. Kemper Fellowship for Teaching Excellence but also the Mizzou Alumni Association’s Faculty-Alumni Award. Not bad for a former reporter who had planned to get a master’s degree and return to the newspaper business.

Perry’s range includes the personas of tough mentor and caring counselor, recalls Kia Breaux, BJ ’96, Midwest regional director for the Associated Press, who studied under him in two reporting classes. “He was very firm, and he demanded nothing but excellence from his students.” She says rumor had it that his nickname at a former job was “Scary Perry.”

Breaux was in a class with Perry when a big murder story broke in a small mid-Missouri town. Perry sent her there to interview neighbors of the man accused of killing his mentally handicapped brother. At one residence, a white woman opened the door but refused to answer questions from the young African-American reporter standing before her. “She told me to go to other side of tracks and see if anyone would talk to me there.” Breaux retreated to her car, crying, and decided to quit journalism. “When I told Earnest about it, he related several instances of prejudice he faced working in Texas.” She didn’t know it then, but his view was much longer than that.

As a historian specializing in civil rights and media, Perry says U.S. society is at a delicate point when it comes to race. “We have had that conversation a long time, but in fits and starts. We may be in one of those transformational moments where we are going to take either a step back or a step forward. My work as a civil rights historian revolves around helping my students understand that civil rights, equal rights, is a long struggle. It continues. For every win there is a series of losses.”

Breaux had felt a loss but did not know what would come next. “In the end, Earnest refused to allow me to quit. He sent me back to finish the reporting, which I did. That conversation made all the difference in the world to me.” Perry can be tough, she says, but he is compassionate.

“The reality is he’s open and wants to connect,” says Sco Snipkie, JD ’12, MA ’13, a former student and teaching assistant of Perry’s. “Once somebody comes in and makes that connection, he’s there, he’s loyal.”

A Class on Class

The scene is a lecture hall with 250 undergraduates, many from comfy, homogenous suburbs around the country, with Perry stationed front and center. It’s an early session of cross-cultural journalism. The required course is not designed to make students feel upended, Snipkie says, but nonetheless this will be a semester of questioning assumptions and soul-searching. Perry begins: 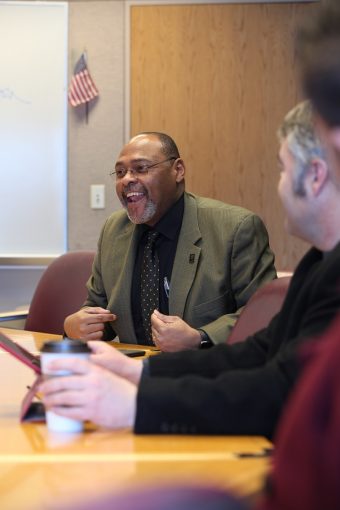 The journalism historian's reputation for holding students to high standards is leavened by his gregarious good humor. Photo by Rob Hill.

“Everyone who thinks they are upper class, raise your hand.” Maybe three or four hands go up.“Who is lower class?” Ten or 11 raise hands.

“Now raise your hand if you are middle class.” All the rest signal.

“OK, let’s think about this way. If you take away your family’s money and it’s just your income, then what are you? At this point, Perry says, “The whole class just sort of stops and says, ‘Well, I guess we’re all poor.’ And I’m like, ‘Right.’ ”

From there, Perry leads a discussion of class stereotypes, stigmas and imagery. It’s contentious at times, Snipkie says, with most students calling the rich elitist and espousing an up-by-the-bootstraps, all-in-this-together view of their beloved middle class.

This is just the beginning of the course, and students nonchalantly declare themselves, cock- sure. “It’s the opening of their minds to these issues,” Perry says. He spends the rest of the semester challenging their belief in their own cultural sensitivity. By finals week, he says, students are much more likely to ask questions, seek clarifications and ponder the niceties of definitions before rendering opinions.

What Do You Mean?

Perry says the course is not — as some students have complained — an initiation into political correctness. So many people use the term in so many ways that it fails to meet his scholarly requirement for precision. But it’s a hot button he’ll push as he coaxes students along. “I say to my students, ‘If someone walks up to you and says, “I hear your cross-cultural journalism class is politically correct,” what is your response as a journalist? It should be, ‘What do you mean by that?’ ” Perry won’t countenance reporters exercising their assumptions about other people’s ideas and lives. He pushes them outside of themselves. His axiom: It’s not about you.

It’s not really about cross-cultural journalism, either, Perry says. “What we talk about is excellent journalism, understanding that stories are complex, that stories need to have context, and that you need to have voices coming from different perspectives sharing their own lived experience. If you are going to do this job, if you’re going to tell stories from someone else’s lived experience, it can’t be about you. If it is, then you are telling your own story.” On this score, he says, mainstream journalists are “horrible.” Perry is surprised with a 2016 Kemper Fellowship for Teaching Excellence. Photo by Shane Epping.

Take the 2016 presidential election as an example. Perry describes the coverage largely as confirmation journalism, in which reporters repeat candidates’ well known characteristics. “We weren’t listening to what people were saying and telling stories from their lived experience,” Perry says. “That sort of journalism would have opened up people’s eyes as to how others felt about the direction of the country. The common knowledge was that women would overwhelmingly support Hillary Clinton. Didn’t happen. And that Hispanics would go to the polls in record numbers because of Trump’s stance on immigration. Didn’t happen.” More excellent journalism, he says, would have led to fewer surprises.

“Earnest has a highly developed sense of outrage,” says Davis, his friend and former colleague. It was a productive trait during his seven years as director of journalism studies and is now as he settles into the role of associate dean for graduate studies. When he sees a problem, Davis says, the “That’s how we’ve always done it” brand of bureaucratic inertia makes him crazy. For instance, doctoral students had long gotten enough education and practice in research but not nearly enough time learning to teach.

“He and I talked about it awhile,” Davis says, “and then in classic Earnest fashion, he said, ‘All right, I’m going to fix it.’ ” As a result, doctoral students now spend a year working under a faculty member in the classroom, then take over as the instructor of record. Problem solved.

Along the way, Perry has served as an example for other administrators, including Lynda Kraxberger, MA ’98, associate journalism dean for undergraduate studies. “He has been a great mentor and guide to me in how to manage up, down and sideways,” she says. At the moment, Perry is guiding faculty in the redesign of master’s and doctoral degree programs. “Faculty have great visions of, ‘We want to do this and that and the other thing,’ ” Kraxberger says. “Fortunately, he understands that the delicate dance of faculty governance is best done with skilled communication.”

After 14 years at the J-School, Perry remains the tough guy who will tell students to cut back when extracurricular activities distract from their studies. But he has evolved, Kraxberger says. “Over the years, working the halls has made him more accessible,” she says.

Perry would be happy to hear that word — accessibility. “That’s something you don’t get on Facebook or email or a phone call,” Perry says. “I still have students call me just to say, ‘You know, I wish I could stop by your office or see you in the hallway because I’d like to have a conversation with you.’ And I say, ‘OK, let’s talk.’ ” 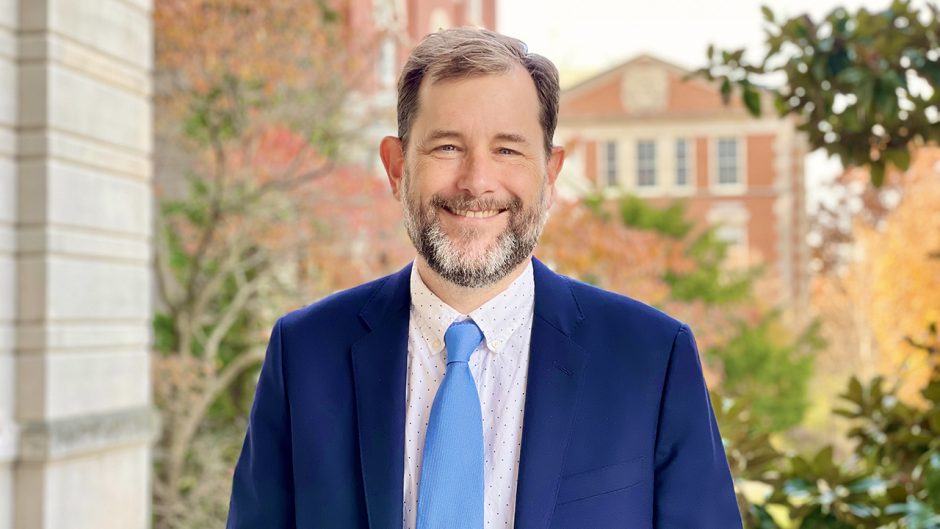