In 1939, separate was not equal. Especially for Lucile Bluford, an experienced African American journalist who wanted to earn one of the most prestigious degrees in her field: a graduate degree from the Missouri School of Journalism. 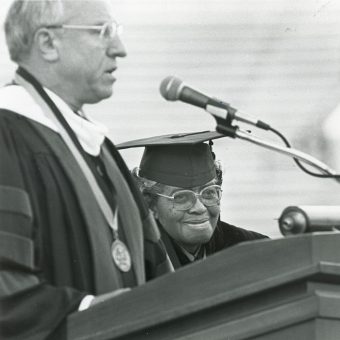 After earning an undergraduate degree from the University of Kansas, Bluford began her career as a journalist at the Daily World in Atlanta. After a short time, Bluford returned home to Kansas City, where she worked for the Kansas City American and then the Kansas City Call.

At the age of 27, Bluford applied and was accepted to attend the University of Missouri as a graduate student, but when she went to enroll at the school, she was turned away. Citing “separate but equal” Jim Crow laws, officials told Bluford to apply to Lincoln University, which was the only Missouri public university open to African Americans.

At the time, Lincoln University had no dedicated journalism school and Bluford had more journalism experience than two of the three journalism professors working at the university. With the help of NAACP attorney Charles Houston, Bluford filed several lawsuits against the University of Missouri. In 1941, after two years in the courtroom, the Missouri Supreme Court finally ruled in her favor. However, MU temporarily closed its doors to all graduate students in 1942 due to a shortage of students during World War II. Bluford was never able to attend.

“Lucile Bluford was a leader who dedicated her life to fighting injustices that served to the detriment of the African American community.”

Bluford, who died in 2003, continued to fight racism and inequality, serving as a leading voice in the civil rights movement. Her work as a journalist helped grow her newspaper, the Kansas City Call, into one of the largest and most important black newspapers in the country.

In 1984, Bluford was invited back to MU and awarded the Missouri Honor Medal for Distinguished Service in Journalism, the School of Journalism’s highest honor, for her outstanding journalistic career.

In 1989, MU officials awarded Bluford with an honorary doctoral degree. Bluford said she accepted the degree, “not only for myself, but for thousands of black students” the university had discriminated against over the years.

“Lucile Bluford was a leader who dedicated her life to fighting injustices that served to the detriment of the African American community,” said Kevin McDonald, vice chancellor for inclusion, diversity and equity. “With an astonishing 70 years of service to the Kansas City Call newspaper, Lucile used journalism as a vehicle to eradicate systems and structures that served as impediments to progress, especially in the area of higher education. We remember and honor Ms. Bluford’s fight as we continue to move Mizzou toward inclusive excellence.”

In 2016, to honor her acclaimed career and her leadership in the civil rights movement, Missouri Gov. Jay Nixon signed a bill designating July 1, 2017 as the first “Lucile Bluford Day.”

“It’s fitting that the state honor Lucile Bluford, who fought to provide voice to the voiceless throughout her career,” said Lynda Kraxberger, associate dean and professor in the MU School of Journalism. “Bluford’s persistent advocacy for people of color stands as a monument of truth to power.” Lucile Bluford was the owner and publisher of the Kansas City Call, a respected black weekly newspaper she joined in 1933.
Tory Reed, Columbia Missourian, 1989