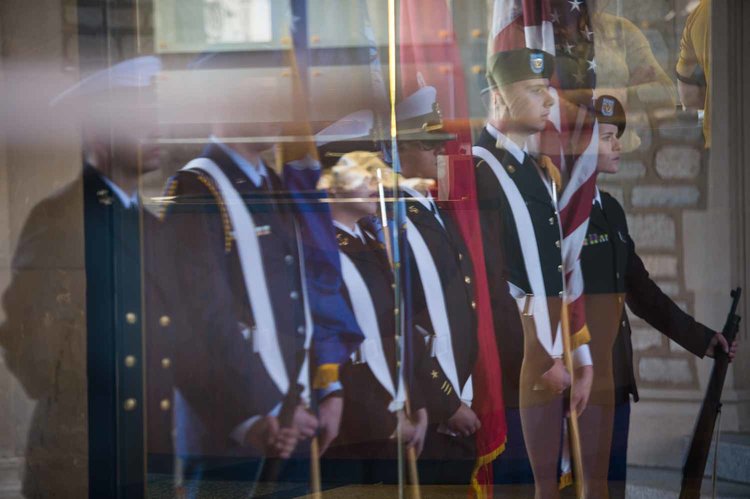 Mizzou honored Tigers who have served in the armed forces with a weeklong series of events, including a parade, a blood drive, panel discussions and a visit from Medal of Honor recipient Kyle White. The salute to veterans culminated in the annual Veterans Day wreath-laying ceremony at Memorial Union.

Memorial Union honors 117 MU men who lost their lives in service to the United States during World War I. Their names are inscribed on the inside walls of the tower archway. In a tradition that dates back to a time when most men wore hats, whenever one walks beneath the archway, they are to tip their hat as a sign of respect to their deceased brothers; in addition, every student speaks at a whisper under the archway. A plaque was later added inside the north wing in which the names of 338 MU men who lost their lives in World War II were inscribed. Lt. Col. Matt Daack, Air Force ROTC Det 440 Commander, speaks those who gathered on the east side of Memorial Union. A member of the ROTC stands at parade rest during the wreath-laying ceremony, which lasted from noon to 1 p.m. Members of Mizzou's ROTC are reflected in the glass doors under Memorial Union's archway. Jay Forthaus, a former captain in the Air Force, lowers his head while names of Mizzou students who have lost their lives while serving in the military are read aloud. Abigail Eckerly, formerly a seaman in the Navy, reads the names of fallen soldiers aloud. Curt Lenz, a former Army medic who served in Iraq and Afghanistan, is currently a Mizzou student who supports U.S. veterans. The tops of flags carried by members of the ROTC mirror the spires atop the Memorial Union tower.

Albert Fleer, a member of the Missouri Air National Guard, holds his hat to his chest during the National Anthem. Patti Hosack holds a U.S. flag during the playing of the National Anthem. Brent Unger, a lieutenant colonel in the Air Force, salutes during the playing of the National Anthem. A wreath is lowered under the Memorial Union archway. Avery Scott, a 2016 Mizzou graduate, was one of a few musicians to play taps on campus when the wreath laying ceremony concluded. One of the many collaborations of the Veterans Center is with the Mizzou Student Veterans Association (MSVA), the official veteran student organization at MU. The Veterans Center participates in the annual Mizzou Veterans Week in coordination with MU Student Life and the assistance of other MU staff and organizations across campus. The week of activities honor, remember and celebrate Mizzou veterans.