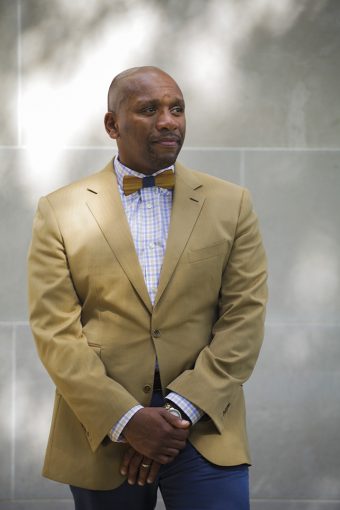 Equity, diversity and inclusion can be lofty, abstract words. Kevin McDonald knows them well. He has spent his career in service to them. And he’s discovered one thing: If these words are only spoken, they remain ephemeral. Mere aspirations. But if you start to do them, they become visible. A prisoner with a fair shot at a second chance. A person in a wheelchair finally getting access to equal accommodations. A first-generation college student with tear-filled eyes, hugging you in thanks for the care you’ve shown him.

From the prison system to higher education

McDonald wears a shaved head, a bow tie, an easy smile and a quick laugh. He’s a lawyer who speaks in sentences that aren’t tortured by legal dictionaries or paralyzed by fear of being misconstrued.

His father is from Jamaica and his mother is from Bermuda, but he grew up in Cleveland. He never intended to make a career promoting diversity and fighting discrimination. He went to law school to study entertainment and sports law.

But during law school, while his classmates took internships at big firms, McDonald interned at the Ohio Department of Rehabilitation and Correction. He went inside state prisons and heard appeals from prisoners facing disciplinary action for prison-rules violations. He spoke with wardens, corrections officers and inmates. “That was eye opening,” he says. “To view the disproportionate number of inmates of color and to question our own system of justice — that started me thinking more about equity and what I could do to be part of the solution.”

After law school McDonald turned down a job at his uncle’s family-law practice in New Jersey to pursue a career in the Washington, D.C., area. He was engaged to be married in one year. His fiancée (now his wife, Kimberlyn McDonald, a human resources consultant with MU) said she would leave her job and follow him after the wedding if he had found a job by then. If not, he had to come back to Columbus, Ohio.

“I thought it was going to be simple,” McDonald says. “ ‘Of course! No problem. I’ll have that solved in two days,’ ” he remembers thinking.

Instead it took him seven months. He finally took a contract job, with no benefits, at the U.S. Department of Justice (DOJ). He was once again hearing prisoner complaints but this time from inmates with disabilities who claimed they were not receiving the accommodations they were entitled to under the federal Americans with Disabilities Act (ADA).

He called Kimberlyn with the good news. “She said, ‘What if we get sick?’ And I said, ‘Our deal was for me to find a job. You didn’t tell me it had to have benefits.’ ” At this point, McDonald is laughing in the retelling. “So my stint there wasn’t as long as I wanted it to be because I needed to find a job with benefits.”

From there McDonald went to a domain registration company — a job with benefits — where he continued to mediate disputes but this time between companies and cybersquatters.

He quickly transitioned back to social justice work, however. McDonald took a job at the University of Maryland as a campus compliance officer, investigating complaints of discrimination. From there, he went to Johns Hopkins University, where he implemented a comprehensive mediation program.

“I just felt called to go. I felt it was where I really needed to roll up my sleeves and get involved in the work.”

In 2005 he joined Virginia Tech as director of their equal opportunity and affirmative action programs and was later promoted to vice president for equity and inclusion. The school was still in the aftermath of a series of controversial decisions prohibiting, then re-allowing, consideration of race and gender in admissions. “There had been a lot of protests, a lot of things going on there,” McDonald says. “I just felt called to go. I felt it was where I really needed to roll up my sleeves and get involved in the work.”

After five years he joined the Rochester Institute of Technology (RIT) as vice president and associate provost for diversity and inclusion. Then protests roiled the Mizzou campus, administrators resigned, and a new system-level diversity position was created. McDonald once again heard a calling.

After only a few weeks on the job, McDonald has not yet diagnosed every ill in the UM System. But after 20 years in the field, he knows how to start the work.

McDonald calls himself “a consensus builder, not a hell raiser.” Partly that’s his personality, but it’s also the best way he’s found to do the work of diversity and inclusion.

For McDonald, that means building relationships, being engaged and actively listening. “Particularly in this work, you want people to leave feeling they had some positive experience with you, that it wasn’t just a meeting,” he says.

For an organization to be the best it can be, it can’t marginalize a portion of its own community.

That consensus approach is important, McDonald says, because for a university to succeed in its diversity efforts, the mindset has to be that diversity is everyone’s job. “It has to be seen as a core function of people’s areas that is attached to our entire organizational pursuit of excellence,” McDonald says. He calls it “inclusive excellence.” For an organization to be the best it can be, it can’t marginalize a portion of its own community. It needs everyone performing at their best.

The idea that diversity is more than a quota is an important one for McDonald. Too often, he says, universities focus only on numbers. They think that recruiting a faculty and student body that is more ethnically diverse is, by itself, the definition of success. “That has proved, time and time again, to be faulty logic,” he says.

McDonald defines diversity as the various mix and combinations of human differences and inclusion as the optimization of those differences. Recruiting people who make your campus more diverse without putting supportive systems in place to make them successful is like building only one half of a bridge.

The first thing McDonald is working on is a diversity strategic plan, an analysis of the systems in place now for faculty recruitment and retention, student recruitment and student success, staff development, and even alumni engagement and to develop metrics to measure progress in those areas.

It’s a collaborative approach that uses data as a guide.

“We need to look at what the data are telling us and look at it disaggregated, to see what story is coming from that, and do something with it,” McDonald says.

It’s the approach he used at RIT to build the program he looks on as his greatest moment of success — so far.

McDonald was serving on a student success steering committee at RIT. The school was trying to figure out how to address the poorer performance of male students compared to their female peers. Not too long into the work, McDonald realized the committee was overlooking one group on campus. The university wasn’t thinking about how to help men of color, who were enrolling at lower rates, earning poorer grades and graduating at lower rates than their peers.

McDonald did some research and got approval to launch Men of Color, Honor and Ambition (MOCHA). The program puts 20 undergraduate men through a yearlong mentorship program that incorporates health and wellness, leadership development and public speaking training through the Dale Carnegie Training program, nonprofit work, and academic support. Each student who completes the program receives a custom-fitted suit, a tie and dress shoes.

“My college experience is really what informed the program. It was everything I wish I’d had and didn’t."

“My college experience is really what informed the program,” McDonald says. "It was everything I wish I’d had and didn’t. I never had a mentor in college and didn't even know about how to go about developing a relationship because I wasn't aware of its importance.”

MOCHA pairs each student with two mentors and incorporates those lessons McDonald struggled to figure out on his own — the importance of health and wellness, academic success, personal finance, business etiquette and personal communication.

The program maximizes the contact between mentors and students. As a mentor, McDonald didn’t give lectures about wellness; he sweated through hot yoga classes with his students and cracked eggs side-by-side with them in cooking classes. “You’re doing it with them,” he says. “You’re not just telling them what to do. So they know you’re really committed, invested.”

The transformations were head turning.

“You hear their trials and triumphs. You hear their fears, from relationship challenges to academic success to views of the world and desire to make it better. You have a hand in shaping how they view the future and their place in it,” McDonald says. “Particularly for a group that in many segments of society is told that they’re less than, or they have lower expectations of what they can do, to go out and want to just conquer the world, and to go on to jobs that are with Vanguard or JP Morgan Chase, or Apple, or Intel, it was great.”

The program picked up corporate sponsors when its graduates went out into the workforce and wowed their bosses. “Their companies would contact me out of the blue: ‘We need to know more about this program because we love this person,’ ” McDonald says.

He still keeps in touch with his students. He helps them make connections in their fields, reviews their résumés, or just catches up with their lives. It’s not the kind of program you can just walk away from.

“You could just see the level of gratitude for the investment you’re making in them,” he says. “Some of these young men, the level of emotion they showed was just tremendous. Tears, hugs — ways society often would tell them they shouldn’t show emotion, and they were like, ‘Forget that; this has been transformative.’ ”

McDonald says he is already making preparations to start a similar program to the UM System.

“I think it’s just in my DNA to want to continue it.”