The Hinkel family, from left: Blake, Myles, Lora and Jackson Hinkel have been involved with the Thompson Center since its inception and credit Blake’s treatment there as a important part of his development.

On Jan. 15, Gov. Jay Nixon proposed his fiscal year 2017 budget, which includes $5 million to expand the University of Missouri Thompson Center for Autism and Neurodevelopmental Disorders.

Autism affects one in 68 children born in the United States. The center’s mission is to provide world-class programs that integrate autism research and clinical service.

The Hinkel family has been involved with the Thompson Center since it opened. Lora and Myles Hinkel’s son Blake, now 13, was diagnosed with autism at 21 months of age.

“At that time, most children were not diagnosed until age 4 or 5 when preschool or kindergarten teachers addressed the issue,” Lora said. “We utilized any resources we could find in Columbia, but there weren’t many services in the area at the time.”

Lora attended the first meeting about the Thompson Center at the Columbia Public Library, and along with other families, discussed the need for autism research and services.

“My husband and I were members of the initial advisory council that was created to assist in the planning and creation of the Thompson Center,” Lora said. “It has been amazing to watch the Thompson Center grow from an idea, to a small office and now to the world-class research and treatment center it is today.” Blake, 13 with his younger brother Jackson.

The Hinkels recognize the impact the services provided at the Thompson Center have had on their son and family. With the development of the center, Lora says, Blake’s services became more centralized and they were able to better pinpoint his needs.

Like many children with autism, Blake has apraxia of speech. Many such children never become verbal.

“As a professional who works with children with autism, I know that without the interventions that he has received, Blake likely would not have the opportunities and the ‘voice’ that he does now,” Lora said. “We have been told by many people that, were it not for the intensity of Blake’s early interventions, he likely would be nonverbal, not as advanced academically and would demonstrate many more significant negative behaviors.”

Blake is an active 7th grader. He participates in Cedar Creek Therapeutic Horseback riding and plays baseball and basketball. His mother says his favorite activity is swimming, and he competes on the Special Olympics swim team.

“He is a prime example of somebody who is doing very well as a result of early diagnosis and intervention,” Myles said. The Thompson Center would use the $5 million in expansion funds to house its extensive multidisciplinary research and training efforts in a central location.

“We are going to be able to expand our capabilities on the research and training side, which will help us on the clinical side,” said Stephen Kanne, executive director of the Thompson Center.

Kanne said the expansion would provide a dedicated space for researchers at the Thompson Center many of whom operate their labs in various locations around campus.

“Our researchers come from many disciplines across the university,” Kanne said. “Bringing all of their labs under one roof would make it easier for patients to participate in our research studies and foster even more innovative collaboration among our faculty.”

Kanne also says the money would help support infrastructure that provides space for research studies of patients with autism. For example, a mock MRI setup in the research space would allow participants to practice tolerating the test environment before executing the research-quality imaging required for studies.

“There are so many aspects of autism that need focus to be able to help families,” Kanne said. “Having the space and dedicated funds to support autism research would allow us to tackle the big questions of what are the genetic causes of this disorder and how do we treat it.”

According to Kanne, the money also would help address one of the biggest obstacles in the autism medical field: training physicians and clinical providers.

“As more and more children are diagnosed with autism, the demand for life-changing services this center provides and others around our great state continues to grow,” MU Interim Chancellor Hank Foley said. “The Thompson Center is a vital asset to our university and to children and families throughout the region.”

Thousands of people from around the nation and world seek help from the Thompson Center. With the proposed money, these services could be available to improve the lives of more individuals and families affected by autism and neurodevelopmental disorders.

“We provided more than 9,000 instances of online and in-person professional and parent trainings in 2015,” Kanne said. “The expansion would give us the capacity to train about 100 more providers over the next five years to help alleviate the shortage of autism services in Missouri.”

The proposed money would provide the Thompson Center with greater capacity for programs that support families and promote autism best practices in the community. Examples include parent workshops, autism-friendly business training and the new STRIVE program, which supports educational and vocational goals of children with autism who are transitioning to adulthood. These children need to learn job and life skills that make them happy and meaningful contributors to the community.

“We are hopeful Blake will get the chance to access the transitional program offered by the Thompson Center,” Myles said. “It is so important that we offer services to these individuals not only as children, but also as adults. Our hope for Blake is that he can find an occupation that he really enjoys and makes him happy. It is going to mean the world to him and to our family.”

“We need programs like STRIVE and places like the Thompson Center to support these individuals throughout their development to ensure continued positive development and opportunities,” Lora said.

The Thompson Center launched in 2005 with a gift from MU graduates William and Nancy Thompson. The Center received $5 million in state funding in 2009 to move to its current location. The Thompson Center’s reputation for life-changing services is known across the country.

“I have been at the Thompson Center for so long that I have had the opportunity to see kids like Blake grow up,” Kanne said. “I have seen the impact that we are having on these kids and their families, and that is the most rewarding part of my job.”

The governor’s budget proposal will go before the Missouri legislature and, if passed, would take effect in July. 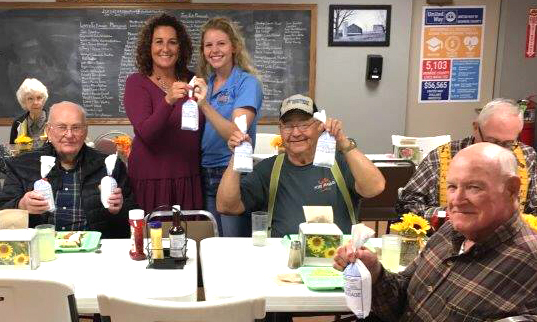 To date, the program has provided more than 318,000 servings of pork to food-insecure Missourians.