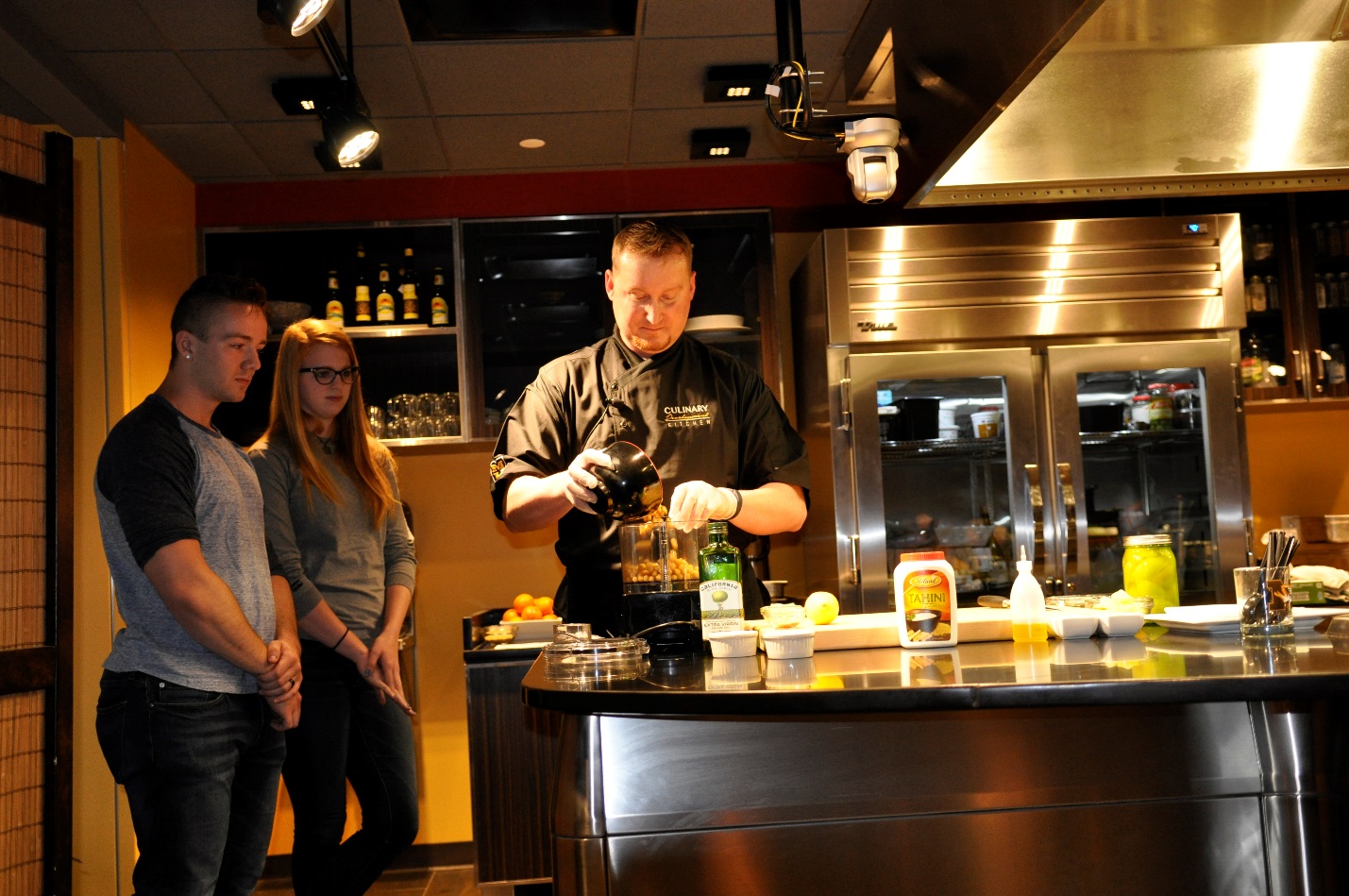 Across college campuses, it can be difficult to find a group of students in conversation without the presence of smartphones or laptops. But a different scene was set at Mizzou's Culinary Development Kitchen, where about about 30 students gathered Oct. 13 for a Culinary Discovery Series event. Seated around dinner tables set for eight, students smiled, talked and engaged in cheerful conversation with no cell phones in sight. Chef Joe Moroni shared his inspiration for the menu: “Tastes of the Middle East.”

“The Middle East is still a mysterious place for many people,” Moroni says. “Through these events, we hope to encourage the embrace of — and desire to learn about — cultures different than our own. Food provides a great avenue to learn about a culture, and I hope that through my interpretation of the history and culture of the Middle East, students will gain new knowledge and appreciation.” Presented by MU Executive Chef Eric Cartwright, along with other MU Campus Dining Services chefs from across campus, the events are held in the Culinary Development Kitchen. Open since August 2014, the 660-square-foot kitchen is tucked inside Sabai, an à la carte dining location inside Johnston Residence Hall. It's used for recipe development and staff training as well as the Culinary Discovery Series.

During series events, attendees learn about each dish being served in the four- to five-course menu developed by one of the chefs. Multiple televisions are displayed throughout the kitchen, providing an up-close view as the chef demonstrates and explains how each item on the menu was prepared.

“We’ve been to all but one of the Culinary Discovery Series events,” says Olivia Ledford, a sophomore at MU, referring to herself and Cody Price, a senior at MU. “We love food. We would rather be eating than doing anything else.”

Ledford says the variety and quality of food and the different experiences offered at each event have inspired the pair to attend all of the dinners since the Culinary Discovery Series launched last spring. Each event is uniquely designed by the chefs to create a menu congruent with the theme. Executive Chef Eric Cartwright and Chef Joe Moroni prepare one of the courses offered at the “Tastes of the Middle East” discovery event.

Moroni has been a chef for 23 years and recently joined the University of Missouri to form a team of six chefs on the MU campus. Before coming to Mizzou last year, Moroni spent 11 years in the U.S. Army and worked as a personal chef for the director of the National Security Agency.

“My time in the Army is where I developed my interest in food and cooking,” Moroni says. “I had the opportunity to meet a wide variety of individuals from immensely different cultures. Cooking for each other was one of the ways we shared our individuality and culture, helping us connect and build friendships.” To incorporate the culture and history of the Middle East into the Culinary Discovery Series event, Chef Moroni included staple food items from the region into the five-course meal. A few of the items included wheat, honey and olives.

The dinner also was served “family style” in large dishes passed around to each person. This resembled the history of the nomadic lifestyle of the Middle East, where food is celebrated and often served in large dishes for a large number of people. Chef Moroni educated the dinner guests on what cooking devices are commonly used in the region. These devices are easily disassembled for transportation.

In addition to creating recipes to educate students about different cultures, the MU chefs also eagerly listen to international students requesting dishes to comfort them during their time away from home. Moroni says the chefs use the Culinary Development Kitchen to create recipes to be offered all over the Mizzou campus. He is currently trying to develop a recipe for an item to be offered at the student center: chicken feet, a food commonly consumed in the Chinese culture.

“Food is a line of communication,” Moroni says. “No matter what language you speak or your cultural background, when you see a piece of bread you know what it is. Food has the power to break boundaries.”