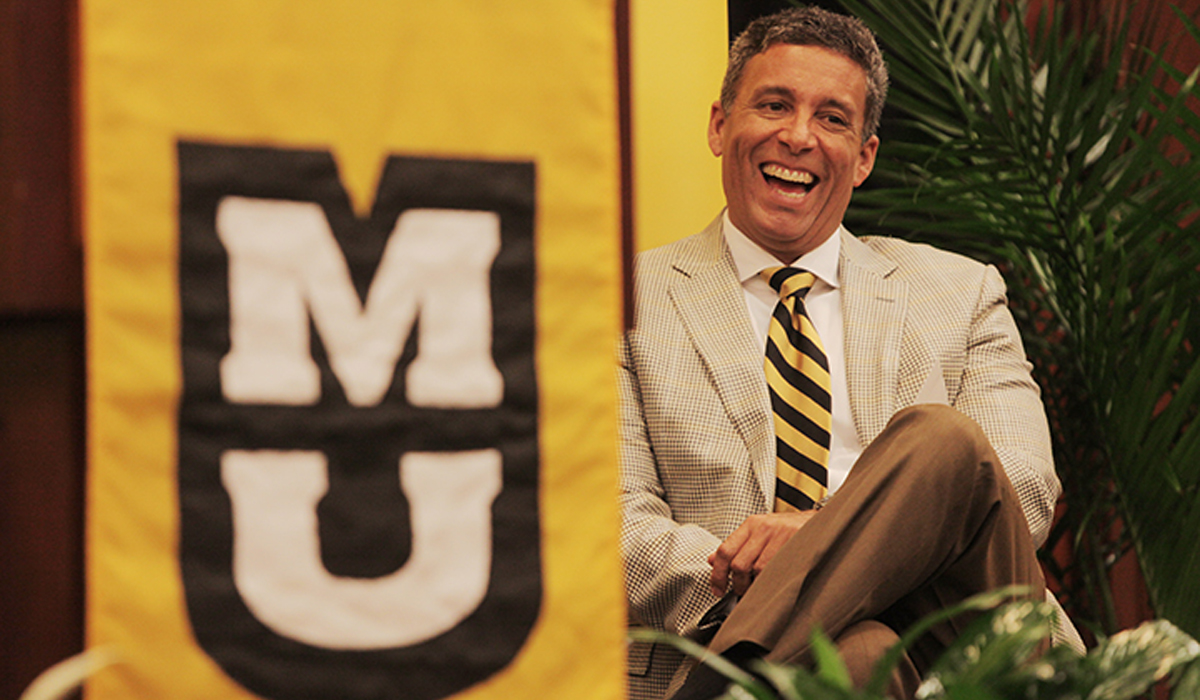 The first college paper Mark Wilkins ever wrote could have been his undoing.

“There was a sea of red ink — more red ink than I’d imagined could be on a paper in my life,” he says, describing the pages Elaine Lawless, now a newly retired Curators professor of English and folklore studies, handed back to him in her 1986 introductory English class.

He didn’t know it then, but it was a turning point in Wilkins’ development, not just academically but also personally.

It was the first of many moments at Mizzou, both in class and on the job, that a professor or staff member challenged Wilkins to think bigger and perform better.

And it is the same challenge he levied back to his alma mater March 13, with a $1 million gift to create the Mark A. Wilkins Fund for Excellence in the College of Arts and Science.

“This gift is a thank-you for what happened in the past,” Wilkins said during his gift announcement in the Reynolds Alumni Center, “but it’s also our challenge for what needs to happen in the future.”

As a member of the College of Arts and Science Strategic Development Board, Wilkins constantly advocates for improving MU’s ranking in the prestigious Association of American Universities. Arts and Science Dean Michael O’Brien recalled a meeting in which Wilkins asked, three times (because he didn’t like the first two answers), what the college was doing to improve today that it wasn’t doing yesterday.

Wilkins' intensity is driven by the size of the opportunity he sees in a world being remade by the ever-quickening pace of change and technological disruption. “My vision is that Mizzou will be not just the center of the state or the center of the country but, because of technology and a strong worldview, it can be the educational center of the world,” he says. “To shoot for anything less than that is an absolute mistake.”

To help us get there, Wilkins is making a $100,000 cash gift and a $900,000 estate pledge that is largely unrestricted in its use. It will broadly support College of Arts and Science faculty by funding salary stipends, staff, teaching materials, research expenses, and travel expenses for research presentations and educational projects. The gift will allow the college to better attract and retain quality faculty, O’Brien says.

Nearly three decades after after he turned in that freshman paper, Wilkins, a private wealth adviser for Merrill Lynch’s Private Banking and Investment Group and an avid mountain climber, still wonders about one thing from his Mizzou days: why, when he saw that first red-covered paper, he didn’t just give up.

“I’ve been trying to figure that out my whole life,” he says.

The experience made him aware of a difficult-to-define quality in himself, a kind of perseverance. It’s something he looks for in potential employees.