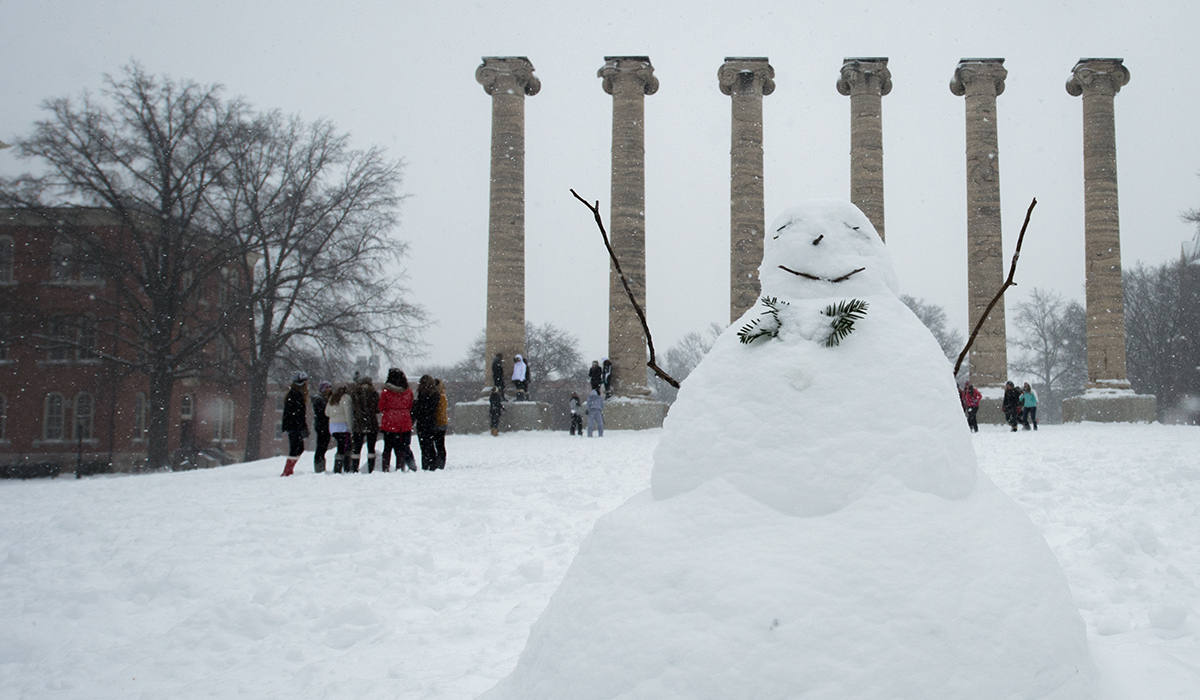 Students run between the Columns in a snowball fight.

A winter storm hit Columbia Tuesday, Feb. 4, covering Mizzou in snow, closing the campus and inspiring students to spend their day off frolicking on Francis Quadrangle.

Mother Nature greeted new chancellor R. Bowen Loftin with a chilly welcome his first week at Mizzou, but the (former) Texan made the most of it. He took to Twitter to incite snowball fights and hold a #snowbowtieger snowman-building competition judged by "snow princess" Karin Loftin, Mizzou's new first lady. The prize is lunch with the chancellor.

While students and faculty took the day off, Campus Facilities employees toiled in the brisk weather, clearing sidewalks and stairs of snow and ice.

Snow continued to fall Tuesday evening, with meteorologists expecting an accumulation of 8 inches by morning. The MU campus is closed and classes are canceled again Wednesday, Feb. 5.

For more information about severe weather and other emergencies, visit MU Alert. Remember to sign up for notifications.

Sophomore engineering major Brian Throm draws in the snow before joining his friends.

Students arm each other with snow for an impromptu snowball fight on the Quad.

Freshman atmospheric-science major Jacob Thompson poses for a portrait as snow freezes on his winter hat.

Students take turns dog-piling each other while a nearby friend takes a 10-second video of all the action.

Freshman international-business major TJ Hinch starts his version of a snowman. "It's one of the 100 things to do at Mizzou before you graduate," he said.

After Chancellor R. Bowen Loftin asked students on Twitter to create a snowman in his likeness, a few showed up on the Quad.

Snow accumulates on a pine tree branch, just east of the Quad.

A Campus Facilities employee uses a snow blower to clear the steps in front of the Residence on Francis Quadrangle.

A Campus Facilities employee clears the steps outside the Residence on Francis Quadrangle with a snow blower.

Freshman political-science major Matt Broos poses for a portrait on the bronze statue at Tiger Plaza.

Senior journalism major Natalie Ault shows off her black-and-gold (and pink) pride. A native of Arizona, Ault loves the snow, which she doesn't see too often at home.

A couple of students walk south of Jesse Hall on a sparsely populated campus.

Journalism major Tine Rock, an exchange student from Denmark, poses for a portrait to show off her hat. "I'm not sure what it's made out of," she said.

Ronny Bazan, a computer-science graduate student from Bolivia, leaves the Quad after a friend has taken his picture in front of the Columns.

Peace Park lives up to its name on a quiet Tuesday afternoon with nobody in sight.