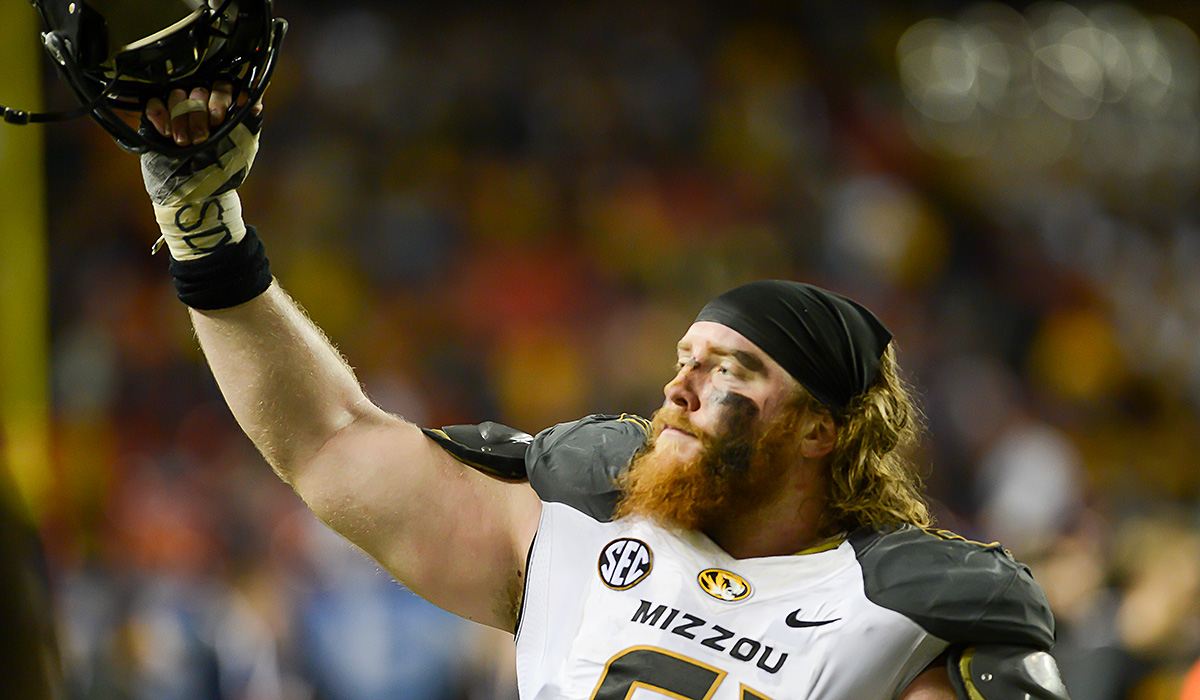 A Mizzou flag flies high outside of the Georgia Dome at a Tiger tailgate party before the game.

Truman dances with the Golden Girls at the Alumni Association Tiger Tailgate.

The Golden Girls entertain fans at the pep rally.

Joe Thomas, father-in-law of defensive coordinator Dave Steckel, shows off his black and gold colors at the pep rally.

Coach Gary Pinkel exits the MU locker room with his players before the game.

Auburn's drum major struts onto the field and leads the Auburn band before the game.

Sophomore kicker Andrew Baggett kicks a field goal to give MU the 3-0 lead.

Junior quarterback Nick Marshall scores a touchdown on a nine-yard run to give Auburn a 14-10 lead.

Auburn recovers its onside kick near the end of the first quarter.

Quarterback Nick Marshall fumbles the ball in the second quarter after a sack by junior defensive end Kony Ealy. It was the second forced fumble for Ealy.

Senior cornerback E.J. Gaines scores a touchdown after an Auburn fumble by Nick Marshall to give Mizzou a 17-14 lead.

Members of the Auburn coaching staff hold a sign to signal offensive plays from the sideline.

Junior running back Tre Mason scores a touchdown to give Auburn a 21-17 lead.

Tre Mason scores his second touchdown to give Auburn a 28-20 lead.

Senior quarterback James Franklin keeps the ball and runs for a gain. He totaled 62 yards on 15 carries.

Junior wide receiver Quan Bray reaches for an overthrown pass by Marshall in the end zone.

Senior receiver L'Damian Washington is brought to the ground after catching a pass from Franklin. A face mask penalty was not called.

The CBS crew prepares for an on-air appearance from the field.

Green-Beckham runs to the end zone for a touchdown and brings Mizzou to within one point of Auburn, 28-27.

Green-Beckham celebrates in the end zone after scoring his second touchdown, a 55-yard reception.

Members of the Auburn band watch members of Marching Mizzou perform during halftime.

Mizzou fans hold up signs to remind those around them of Tiger history.

Junior running back Cameron Artis-Payne runs for a touchdown with 31 seconds left in the third quarter to give Auburn a 45-34 lead.

Franklin runs for a five-yard touchdown to cut Auburn's lead to 45-42. He also made the two-point conversion.

Mizzou players gather on the field before the fourth quarter begins.

Sophomore receiver Ricardo Louis is stopped by Mizzou's defense on an attempt to score a touchdown in the fourth quarter.

Junior tailback Marcus Murphy attempts to down an Auburn punt.

Auburn's defense celebrates after Mizzou fails to convert on fourth down late in the fourth quarter.

Mason runs for a 13-yard touchdown to give Auburn a 59-42 lead, the final score of the game.

A pass intended for Green-Beckham lands in the corner of the end zone.

Mizzou fans control their emotions as Auburn fans celebrate around them.

An Auburn fan erupts with excitement near the end of the game.

Coach Gus Malzahn celebrates with his team after winning the 2013 SEC Championship.

Confetti rains on Auburn in the middle of the field as the Tigers receive the SEC Championship trophy.

Senior guard Max Copeland salutes Mizzou fans with his helmet as he walks off the field after the game ends.

Copeland and Franklin walk off the field together.

Copeland stops and takes one last look at the Georgia Dome before walking to the locker room.

Photos celebrating Mizzou's successes this season were plastered outside the Georgia Dome's locker room, but the mood was somber behind the black-and-gold doors. Senior lineman Max Copeland sat dejectedly outside his locker after Mizzou’s Southeastern Conference Championship loss.

His forehead and nose were caked with dried blood from a season-long wound. His cheeks and forehead were smeared with the remnants of eye black, a warrior’s paint. His wild mane and beard were matted to his head, tamed by sweat from a game played at a breakneck pace.

Following the 59-42 loss to Auburn, pain was apparent in his bright blue eyes.

“Winning is what we do. It’s what we’re trained to do, and we don’t accept anything less,” Copeland says. “When we don’t win, you question your self-worth a little bit. Not rightfully so, but it’s a natural reaction.”

The team’s defense was one of only three in the nation to have not allowed more than 28 points in a game this season en route to a 11-1 (7-1 SEC) record. The top-20 unit was called into question after allowing 677 yards in the Auburn game, 545 of which came on the ground.

“I don’t make any divisions between offense and defense. To me, we’re all Tigers. And we all hurt the same,” Copeland says. “I have an intense pride in my brothers. In adverse times, people show you who they really are, and I wasn’t disappointed in a single one.”

Players and coaches struggled to put the season in perspective after the loss, but Copeland says he thinks the team eventually will take solace in the fact that Mizzou has gained respect. The Tigers’ two losses have been to South Carolina, who will finish in the BCS top 10, and Auburn, who will head to the National Championship following Ohio State’s Big Ten Championship loss.

Mizzou knows that this loss doesn’t end its season. The Tigers will learn their bowl placement Sunday, and likely destinations include Orlando for the Capital One Bowl, Dallas for the Cotton Bowl or St. Petersburg, Fla., for the Outback Bowl. The reward of making a New Year's Day bowl hasn’t settled in yet, though.

“Winning’s our livelihood. When we don’t win, it’s like we don’t eat that week,” Copeland says. “It hurts, you know? Hunger pains. We’ll have to go hungry for a while. But there’s still a meal left.”