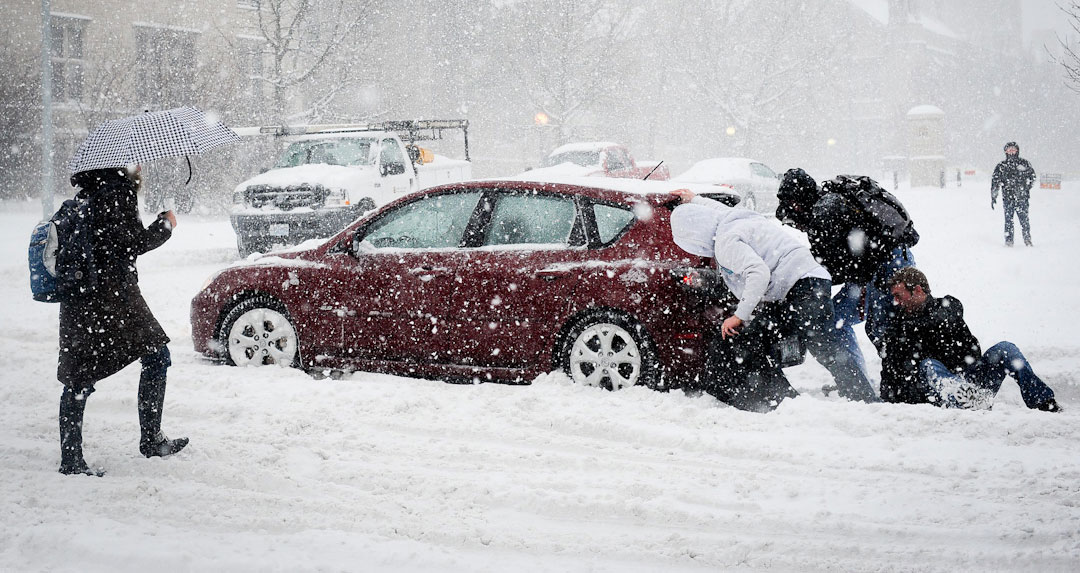 If you’re worried about the weather, then you picked the wrong place to stay.
— “All My Friends” by LCD Soundsystem

On Thursday, Feb. 21, a snowstorm known as Winter Storm Q blanketed the University of Missouri campus with snow and ice. The weather came in the form of a rare meteorological phenomenon known as thundersnow, in which thunder and lightning accompany unusually heavy snowfall.

In anticipation of winter weather, early Thursday morning university snowplows peppered campus and Campus Facilities’ staff readied their shovels. Classes and other activities were under way when the snow began falling just after 8 a.m. By 1 p.m. the severe weather caused the campus to close. By 6:30 p.m. snow accumulation in Columbia had exceeded 9 inches, according to the National Weather Service.

Students entered early-morning classes in clear weather and emerged after exams to scrape their car windows. They huddled in front of fireplaces in the MU Student Center to stay warm and armed themselves with umbrellas to stay dry between buildings. Some stopped to take photos or videos of the snowfall, while others incited snowball fights.

All afternoon Tigers helped one another dig their cars out of snowdrifts and navigate tricky intersections in their efforts to get home. Campus Facilities staff and emergency crews toiled throughout the night to clear roads and sidewalks. University medical facilities remained open and fully staffed.

Light sleet and snow flurries continued throughout the night and into Friday morning, and the MU campus remained closed Friday.

Mizzou staff photographer Shane Epping braved the cold to document the storm and Tigers' responses to the sudden onslaught.

“An excitement was in the air,” Epping says. “As a photographer, I look forward to capturing campus life in the snow, when things are both calm and thrilling at the same time. It’s a rare moment.”

The cancellation of classes is only the seventh in the university's history, but it marks the third time severe weather has shut down Mizzou in the past decade. The campus closed Dec. 1, 2006, following a 20-inch snowfall and Jan. 31 - Feb. 3, 2011, during a blizzard known as "Snowpocalypse."