Taylor Hensel says reclaiming her Cherokee heritage has been a large part of her journey, both within and outside of her time at Mizzou.

She also recognizes a greater need for indigenous representation at Mizzou and within the community.

“I started to lean into what I was passionate about and I realized that I was the only indigenous student in my classes,” Hensel said. “I realized that, because of my skills and cultural background, I could be a part of representing indigenous women in film.” Hensel, currently a graduate student in the Missouri School of Journalism, studies documentary journalism and will graduate later this month. Her journey to define native identity for herself led her to Crandon, Wisconsin, where the Forrest County Potawatomi tribe is located. In spring of 2018, Hensel met with Holly Daniels, a woman who lives near the community and is the main subject in Hensel’s final project at MU — a documentary on Daniels’ experiences navigating her identity and empowering her tribal community.

Daniels, a Forrest County Potawatomi descendent, is not an enrolled member of the tribe because she does not meet the tribe’s blood quantum standards. Yet, Daniels was raised within the tribal community — her grandfather is a respected elder and her father a tribal member. Daniels is passionate about preserving the endangered Potawatomi language.

Daniels’ story as a person of mixed heritage reinforced Hensel’s belief that this topic is important and that there are other Native peoples on a similar journey. Hensel assembled a team of all indigenous filmmakers to help share Daniels’ experiences through film.

“I want to help share Holly’s story because I think people can relate to her search for identity and a place of belonging,” she said. “In addition, I want to spread awareness of the challenges and realities indigenous peoples face.”

In between prepping for graduation and working on a second documentary digging deeper into her own family heritage, Hensel is preparing to move to Washington, D.C., following graduation. There, Hensel will be working as a video producer for the Humane Society of the United States, her dream job since she was a little girl. Taylor Hensel, a graduate student studying documentary journalism in the Missouri School of Journalism, will graduate later this month and start a new job at the Humane Society of the United States.

Hensel credits her amazing experience at Mizzou to her fellow documentary classmates and her faculty mentors, who she said empower students to chase down their passions.

“Documentary journalism is still a fairly small program within the School of Journalism, but I love that because we’re like a little family,” she said. “I’ve been able to mentor younger students in the program, and I’ve been encouraged to take risks and pursue my passion. Everyone I’ve worked with here has been 100% behind me every step of the way.”

Hensel’s documentary will premiere at 4 p.m. Wednesday May 15, at the Missouri Theatre during the Stronger than Fiction Film Festival.

Zeroing in on world hunger

A series of fortunate events

Twin sisters succeed at MU with help of family, faculty and institutional support. 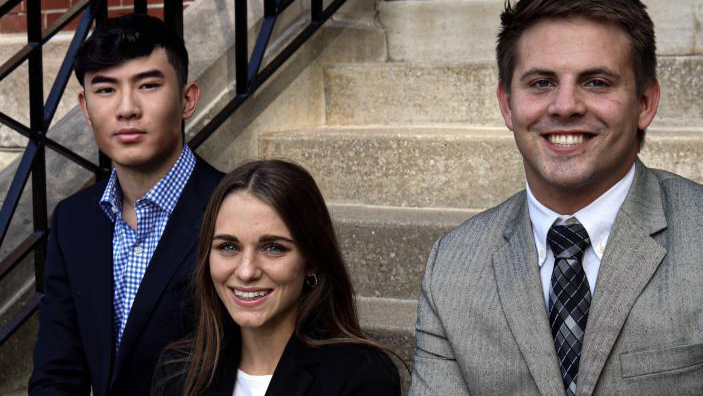 To infinity and beyond

Student Ed Ge is focused on building the next generation of aerial monitoring vehicles.